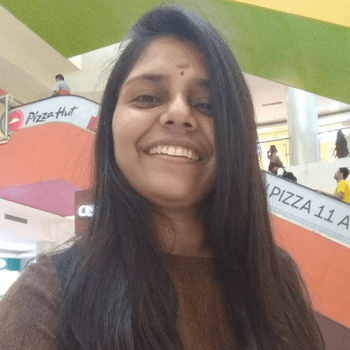 Do you have questions for Suchitra Vijay?

Log in to ask Suchitra Vijay questions publicly or anonymously.

Suchitra Vijay
Communication Manager
Posted last year
Announcing the Club1BR Champion! Has your school or you and your fellow teachers been doing something to encourage the children to read? Let us know and you could be the next Champion!

Congratulations to Vishnu School, Bhimavaram on being the first Club1BR Champions! Read more about what the school has been doing here : https://go.getfreadom.com/2021/05/29/vishnu-school-bhimavaram-club1br-champion/

Club1BR is about encouraging the reading habit in the younger generation. We are readers ourselves and I personally…

Now, truly, all reverts to Nature
All natural beings walk around freely
Even those that humans captured
Now imitate those captured humans

Man, who strutted around thinking
That he was the one and only king
Has now been reduced to hiding,
Afraid of even the air around him.

A miniscule being of man’s creation
Let free, has now endangered him
Yet, none of Mother Nature’s creations
Are threatened or even affected

Man is a master of invasions,
Of boundaries and minute calculations
Yet, most of his beings cause harm
Polluting and destroying all around

He thought the battle was won
The hands of Time wouldn’t turn around
He felt like an invincible conqueror
Just now, he covers in abject terror

Nature’s silence, he mistook for defeat
She waited, for him to trip on his own feet
He thought he had scaled the peak
But what he sees now is just a peek

She waited patiently for him to awaken
To realize that this was no triumphant creation
Centuries of time, she gave him
To pull back on his meaningless mayhem

Dwindling natural resources were an issue
Dying species just cause for concern
All the warning signs, he ignored
Deeming them unworthy of attention

He was given chances for redemption
He is, after all, one of her children
Yet, he rejected them all thoughtlessly
And now is speechless before her fury

Tsunamis, typhoons, hurricanes and earthquakes
All were dismissed as mere tantrums
And now his very own creation
Has set off the final gong

He built her creatures a barbed prison
And quite charmingly, called it sanctuary
She forced him to seek refuge at home
And converted his sanctuary into prison

While he sheltered and finally, felt fear
She healed and set right her wounds
And once and for all, proved to Mighty Man
Just what happens when Mother Nature stands tall.

Liked by Anisha Patel and 3 others

Suchitra Vijay
Communication Manager
Posted last year
Have you ever wondered how children learn how to read? Take a look at this article on our blog - https://go.getfreadom.com/2021/02/17/the-science-of-reading-how-do-kids-learn-to-read

How do kids learn to read? -The Science of Reading

Ever wondered what the science behind reading is? How exactly do children learn to read? These two linguistic theories have answers!